An important part of my practice is to meet with experts in the field. Like bats, rocks, fungi and dreams, experts are part of the natural biodiversity of a place and can help me deepen my understandings. I might meet them by invitation or quite by chance in a cave, on a mountain or in a car park. Many of these encounters have had the status of true exchanges.
-Anna Keleher 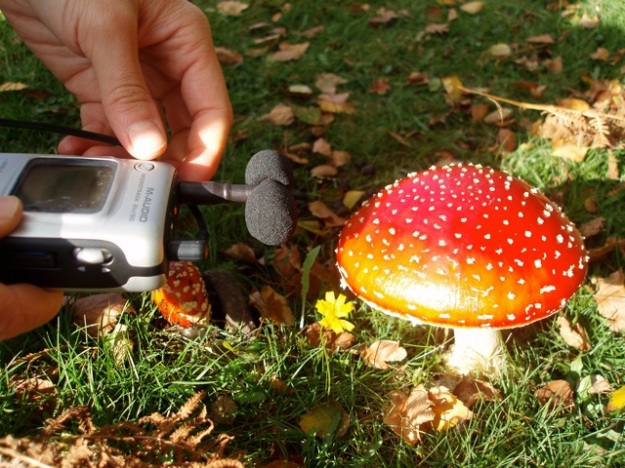 Interview with Fungi, by Anna Keleher

It’s rural, green and hilly my part of Devon, England. As well as badgers, buzzards and hedgehogs there are many farm animals and pets. The weather can be wild on the bumpy highlands of Dartmoor National Park. And along the windy seacoast sea- foam is tossed inland by gales.

However far you stray from paths and roads this land is not a wilderness but a garden, it has been shaped by human- kind. And it is kept that way by teeth, tools and toadstools.

There are many wild things in this ‘not-a-wilderness but a garden.’ Many of them are big, like us and deer and dolphins, but a lot are way smaller, even than ants and those mostly remain nameless and unnoticed by us. Millions of them are engaged in recycling, just imagine the mess if fungi decided to stop digesting wood; piles of dead trees would litter the land until the stocks of raw materials ran out.

As a wilderness thinker I’m turning my gaze upon the world of the very small and towards the possibility of a wilderness even inside my own insides!

Is there a wilderness inside of you too?

We hear a lot about friendly bacteria and bad bacteria. But what about other gut dwellers like parasites, fungi and viruses, no-one wants to get worms or flukes or candida so they must be bad.

But what would an ecologist say about the wild inside? The human gut is surely an ecosystem just like any other! Its probably not right to think that some inhabitants are evil and try and kill them just like that, it probably doesn’t work like that.

I think we might need to shift our thinking. And here is why….I  just watched a really good programme on iplayer about how “Wilderness” is actually a fictional construct. What really stands out to me is the fact that National Parks and Preserves were originally created as tourist destinations, so people could experience the sublime in safety. Animals were naturally divided up in those days into good, bad and useful. And guess what? Native peoples as well as bison and wolves were killed or removed from parks like Yellowstone to leave a pristine “Nature”. Even now the idea of wilderness without human inhabitants persists despite a rather belated understanding of how the original peoples shaped native ecologies and landscapes in their homelands.

But now back to the gut. I think to call the gut a wilderness might be a mistake. It might also be a mistake to identify goodies and baddies among the crowd. But there is a delicate ecology in there and it can get disturbed, like those National Parks and Preserves I mentioned.  In some of those places, predators are being reintroduced and rotting logs, fungi and the like are being left to do their important jobs in the ecosystem. Could this idea translate into the “management” of our wild insides? We are in luck. There is lots of folk wisdom about how to keep our guts harmonious. There are age-old fermented foods, herbs, bitter foods and cures and there is chi.  If we look after our guts they’ll look after us!

I am home-brewing coconut kefir, so pick up a brew of your own and lets toast to the wild inside, with its micro-climate, energy production, gases and perhaps even tipping points.

Here’s to the moulds, the parasites, the bacteria and the viruses of the wild inside and out and long may we all live in harmony!

Anna Keleher is a prize-winning British artist developing projects for societal and ecological change. She is engaged in an ongoing inquiry into human and non-human creativity and communication. Anna and her collaborator Claire Coté (New Mexico) dream with people, places, creatures and things in homelands around the world.  dreamingplace.eu and www.axisweb.org/p/annakeleher/

All images provided by and copyright of Anna Keleher, 2015